Where Do Roaches Live?

A cockroach is the most common household pest. They are usually found in kitchens, and bathrooms, but can be in any portion of a heated structure.

They are primarily active at night, often seen scattering as you turn on a kitchen light. They are especially fond of any food crumbs that are left behind; so good basic housekeeping is one real deterrent. 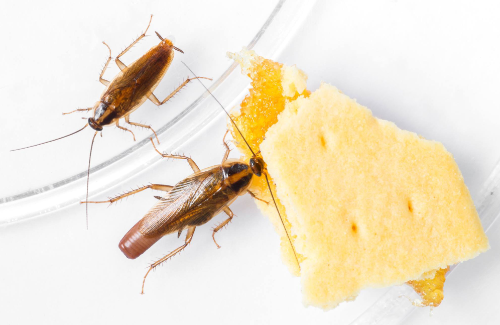 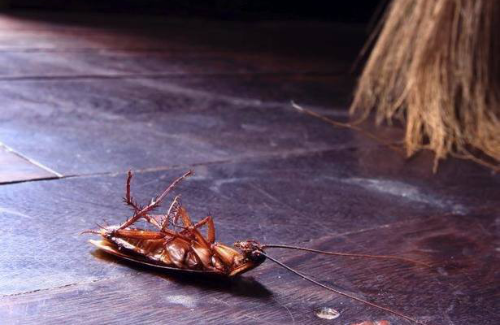 How Do We Fix Your Roach Problem?

Cockroaches are scavengers with a wide choice of food. They thrive on the same food humans eat and pollute human food in process of feeding. Cockroaches carry disease organisms on the loins and bristles on its body, as well as the sticky pads on its feet. Roaches defecate on food and transmit staphylococcus, streptococcus and E Coli.

A roach infestation is not something you want in your property — the only good roach is a dead roach!

When a roach infestation has reached beyond your control, give us a call. We will find the source of the infestation and make sure that roaches will never want to invade your home again. 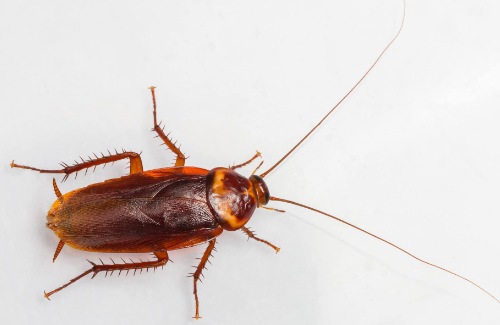 The American Cockroach/Waterbug is usually the one seen when people brag about some “huge” roach they spotted. It can typically reach a body length of around two inches. It is a reddish-brown color. The ability of cockroaches to transmit diseases seems to be highly over-rated, but they are mechanically capable of spreading some disease organisms such as the dysentery bacteria.

Waterbugs can be abundant in sewers and commercial facilities (i.e. grocery stores, prisons, restaurants, hospitals and office/apartment buildings). They prefer to inhabit warm, damp locations such as steam tunnels and boiler rooms. They have wings and can fly, but this is usually seen more in warmer climates. This makes it easy for them to migrate from building to building. In warmer weather they can be found in outdoor locations such as dumps, alleys, yards. Although they feed on a variety of materials, they prefer fermenting foods. 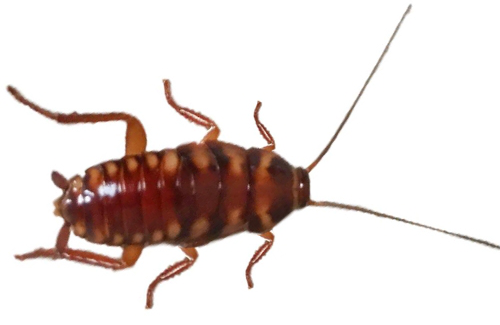 This is the smallest of the domestic roaches with a body length of only 3/8th of an inch. It has distinctive markings-pale brown bands alternating with darker brown bands, which gives it the name. It usually lives in solitary settings or very small groups. Female form egg cases of about 18 eggs in each generation. Like most roaches, it is active at night. 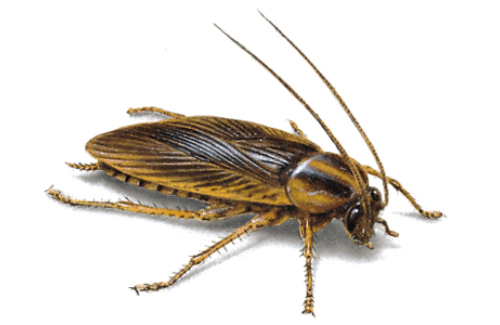 The German cockroach is the most common household pest. They are usually found in kitchens, and bathrooms, but can be in any portion of a heated structure. A nocturnal insect, German cockroaches remain hidden in dark secluded harborages during the daylight hours. If you see some during the day, it is a sure sign that a tremendous population exists.

Unlike the other common roaches, they are very small—with a body length of only ½ inch. The female produces 4-8 egg capsules in her lifetime. Each capsule contains about 48 eggs. She carries the capsule until the eggs are ready to hatch. This usually takes 28-30 days. Nymphs molt 6-7 times before becoming adults. The cockroach population can grow at least 3-4 generations each year, and can complete the life cycle in as six weeks.

Cockroaches are scavengers with a wide choice of food. They thrive on the same food humans eat and pollute human food in process of feeding. Cockroaches carry disease organisms on the loins and bristles on its body, as well as the sticky pads on its feet. Roaches defecate on food and transmit staphylococcus, streptococcus and E Coli.

Habits: German cockroaches are the most common household insect in the United States typically infesting kitchens and bathrooms but they will live anywhere inside a heated structure where there is food, water and harborage areas. They gain entry through grocery bags, cardboard boxes and can infest refrigerators, toasters, and microwaves. German cockroaches feed on all human and pet food, toothpaste, soap, glue, etc. While they are more active at night, they will spend 75% of their time hidden in dark, secluded harborage areas (i.e. cabinets/cupboards, wall voids and around motor housings in appliances). If they are seen during the day, this is a good indication that there is a large infestation. This is because although they congregate in harborage sites, as the population increased overcrowding will force some of them to relocate. 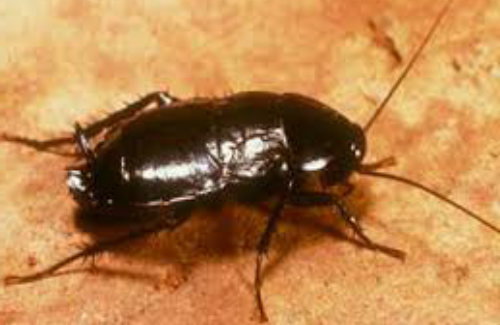 Oriental cockroaches are usually black to dark brown, and are smaller than the American cockroach at about 1-¼ inches in body length. They can become numerous in damp, secluded areas such as crawl spaces, basements, and drains, and are occasionally called “water bugs” by mistake. The oriental cockroach is often found in a bathtub because it lacks sticky pads on its feet and cannot climb the smooth sides.

The female produces about eight egg capsules in a lifetime with each containing 16 eggs. She deposits this capsule within 30 hours after its produced. The nymphs emerge and go through 10 molts before becoming adults. There is usually only about one generation per year, which takes more than 480 days to complete.

Oriental cockroaches seldom enter houses, but are mainly found outside near water sources or in the garage. They are also quite common in the sewers.

Habits: Oriental cockroaches are not common pests in most homes. However, like the American cockroach (waterbug) they can be abundant in sewers and commercial facilities (i.e. grocery stores, prisons, restaurants, hospitals and office/apartment buildings). They also prefer damp, secluded places such as crawl spaces, basements, water meter boxes and drains. They are often found in bathtubs and sinks because they lack the small pads on the last segments of their legs that allow them to crawl up smooth surfaces like other cockroaches can. They can also be found in cold weather in planters, ground covers, stones, leaf litter and other debris. They prefer to feed on starchy food but eat various other items include decaying organic matter. Oriental roaches will give off a very distinct “cockroach odor”.