Where Do They Live?

Beehives and wasps nests are generally located on trees and in forests. They can be found hanging from trees, sofits, awnings, and even in bushes. A natural beehive is comparable to a bird’s built nest with a purpose to protect the dweller.

You will hear them. A buzzing beehive can be quite loud, and a lone bee on its own will make a noticeable amount of noise. An angered beehive can be an extremely dangerous thing so approaching a hive should always be handled with extreme caution and more often then not should be left to professionals.

Bees and Wasps are dangerous period! If allergic to their venom, a sting can be fatal. 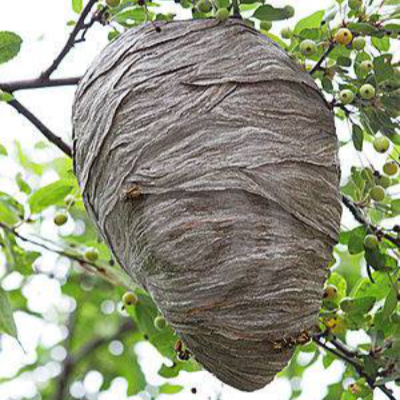 What To Do If Stung?

Bees are generally social insects, with a marked division of labor between the various types of bees in the colony. A colony of bees includes a queen, drones and workers.

The Queen is the only sexually developed female in the hive. She is the largest bee in the colony. A two-day-old larva is selected by the workers to be reared as the queen. She will emerge from her cell 11 days later to mate in flight with approximately 18 drones.

During mating, she receives several million sperm cells, which will last her entire life span of nearly years. The queen starts to lay her eggs about 10 days after mating. A productive queen can lay 3,000 eggs in a single day.

The Drones are stout male bees that have no stingers. Drones do not collect food or pollen from flowers. Their sole purpose is to mate with the queen. If the colony is short on food, drones are often kicked out of the hive.

The Workers, the smallest bees in the colony, are sexually undeveloped females. A colony can have 50 to 60,000 workers. The life span of a worker bee varies according to the time of year. Her life expectancy is approximately 28 to 35 days. Workers that are reared in September and October, however, can live through the winter.

Workers feed the queen and larvae, guard the hive entrance and help to keep the hive cool by fanning their wings across the openings. Worker bees also collect nectar to make honey. In addition, honeybees produce wax comb. A Honeybee comb is composed of hexagonal cells, which have walls that are only 2/1000 inch thick, but support up to 25 times their own weight. A bee’s wings stroke 11,400 times per minute, thus making their distinctive buzz.

Yellow jackets are social colonizers with a queen/worker structure. Yellow jacket queens are more than an inch long, the workers are a little shorter-about 3/4th inch, and all have a typical pattern of black and yellow markings.

Paper wasps get their name from the paper like material from which their nest are made. These nests are begun in the spring, by fertile over-wintering females. Nests are compromised of man cells; each cell wall is made of wood pulp similar to that from which paper is made.

The nests are frequently located under leaves of houses, but may also be found inside garages, in attics and other protected areas. They also like orchards and vineyards. Nests are often quickly rebuilt when destroyed, as several adults will cooperate to form a new nest.

Paper wasps are yellow and black, and are about ¾ inch in size. Their sting can be quite painful-and they will aggressively protect their nests. 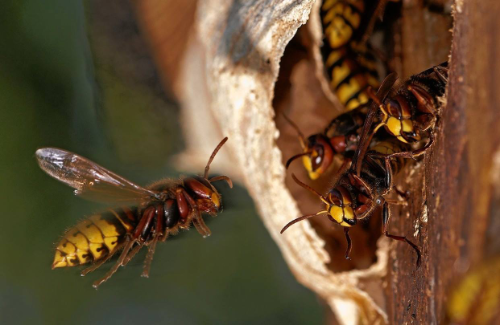 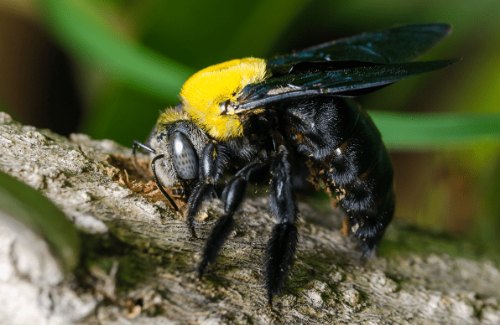 Carpenter bee gets its name from the damage it does to wood. They will attack areas of the home that may include the roof trim, siding, exterior columns, steps, decks, porch beams, outdoor furniture and fences. Entry holes will be approximately one half inch round with a sawdust-like debris below the area being tunneled.

Carpenter bees actually bore holes into wood to create a tunnel in which to raise their young and are not social insects. This means they do not live in nests or colonies like yellow jackets or honey bees. The entry hole is usually dime size in diameter. The initial opening is straight into the wood, then the gallery typically makes an abrupt right angle and follows the grain of the wood and parallel to the outer surface. These entry holes can be found in well-lit and shelter areas such as headers, roof eaves, porch ceilings, fascia boards, dekcs, doors, window sills, etc. Soft or untreated wood (i.e. not painted or primed) are their ideal nesting spots.